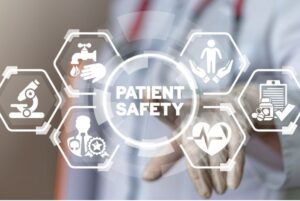 during Upper Endoscopies, then I welcome you to this discussion, where I’d like to share with you some thoughts on two “dirty little secrets” which we encounter EVERY time we provide sedation for an upper endoscopy.

The first is: HYPOXIA.  Numerous studies analyzing medical malpractice lawsuits clearly indicate that the leading cause of lawsuits arising from NORA (Non-OR Anesthesia) cases is respiratory failure, specifically HYPOXIA, occurring during upper endoscopy. This clearly indicates that all upper endoscopies should be considered potentially HIGH-RISK anesthetics!

The reasons for this hypoxia are several, including: shared A/W;  large foreign body (the endoscope) producing A/W obstruction;  upper A/W collapse & decreased respiratory drive  due to the fairly deep sedation often required to prevent patient movement & suppress A/W reflexes (gag, cough & laryngospasm); and finally, from the routine use of an inadequate O2 delivery system: nasal nannula, which can only provide a max FiO2 of at best 35-40 % due to dilution from entrainment of room air through the mouth and nares (around the nasal cannula).

In 2018, as a patient safety improvement initiative, my group decided to search for a practical, inexpensive, cost-effective way to reduce the occurrence of hypoxia during upper endoscopy.

In January of 2019, we found and tried a new oxygen delivery system, the Procedural Oxygen Mask (POM™).

The POM is an FDA-approved clear plastic oxygen mask that looks like a traditional O2 facemask, except that it has self-sealing oral & nasal endoscopy ports.

It also has a capnography sampling port.   The POM connects via standard oxygen tubing to any standard O2 flowmeter.  And when used with the included O2 reservoir side bag, it can deliver very high FiO2’s of 88-95%, simply by dialing the O2 flow rate up to 10-15 L/minute.

After several weeks of use on our highest-risk (morbid obesity, OSA, severe pulm dz) UGI endoscopy patients in the GI suite, we found the POM to be so effective at preventing & treating hypoxia, that it quickly supplanted nasal cannula as our routine O2 delivery system for ALL upper endoscopies: EGD’s, ERCP’s, TEE’s, bronchoscopies, & awake/ semi-awake intubations.

The superior O2 delivery by the POM allows maximal preoxygenation prior to the start of sedation, and in conjunction with close observation of the patient, combined with continuous capnography, prolongs the safe apneic time before critical O2 desaturation, allowing timely & effective INTERVENTION by the anesthesia provider PRIOR TO SEVERE HYPOXIA, thereby dramatically reducing the incidence & severity of hypoxic episodes.

The other “dirty little secret ” which we all know, but have simply tolerated for decades, is the fact that almost all upper endoscopy patients COUGH, often directly toward the staff, both during and also after upper endoscopy.

But in 2020, when the COVID-19 pandemic struck, and the primary route of transmission of the virus was identified as respiratory/aerosol, another tremendous benefit of the POM became evident: the POM mask provides a significant barrier to the aerosol “cloud” produced when a patient gags or coughs from instrumentation of the upper A/W.

The POM has thus turned out to also be a valuable infection-reduction tool.  Our Endoscopy & Recovery Room nursing staff have all expressed tremendous gratitude at no longer having instrumented patients coughing directly toward their faces.

These 2 major benefits of increased patient AND workplace safety from a single, simple device represent one of the most significant advances & improvements I’ve seen in my 35 years of anesthesia practice.   I encourage anyone who provides sedation for upper endoscopy to try it.

I personally would no longer perform –nor undergo–an upper endoscopy without a POM.